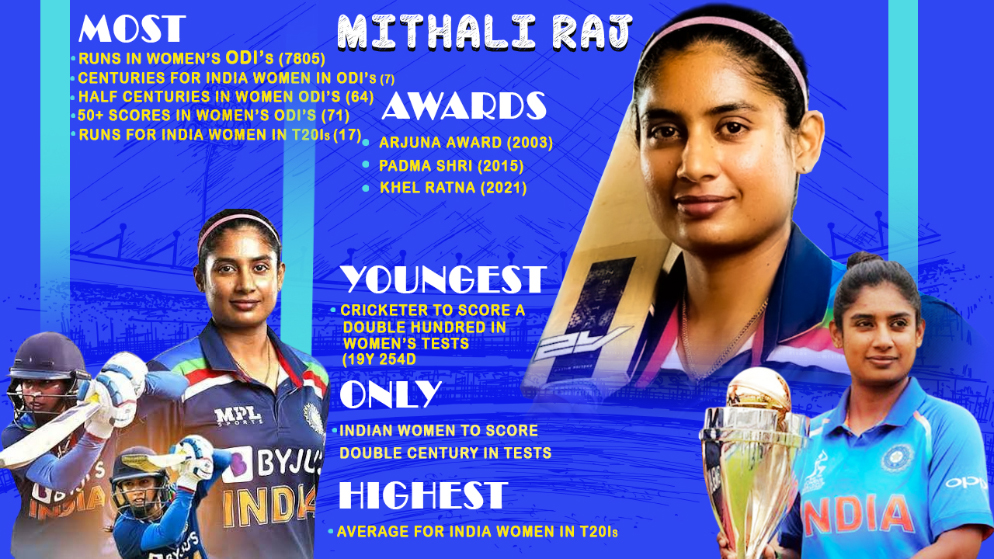 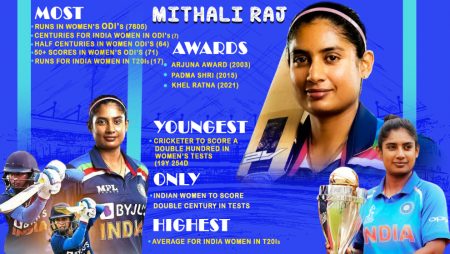 The Captain of Indian Women Cricket team, , most prolific batsman in the Women game’s history Mithali Raj Mithali Raj retires from cricket, bringing down the curtains on a glorious 23 year career.  She last played an international game in the Women’s World Cup 2022 against South Africa in March 27, 2022. Although India failed to win the match and lost the match off the last ball of the game, she scored 68 off 84 balls in that game.

Mithali Raj was born on December 3, 1982 in a Tamil family in Jodhpur, Rajasthan. Her father is Dorai Raj, who was an Airman (Warrant Officer) in the Indian Air Force and mother is Leela Raj. Mithali started to play the game at age of 10. She lives in Hyderabad. Furthermore, She attended Keyes High School for Girls in Hyderabad. Mithali attended Kasturba Gandhi Junior College for Women in Secunderabad for her intermediate studies too. She started doing cricket coaching in her school days along with her elder brother. Mithali played for Railways in domestic tournaments. She is also a Bharatanatyam ancer.

The journey of 2 decades was a great milestone for Mithali Raj. She was considered as lady Tendulkar because of her technical soundness and ability to anchor an innings

Mithali Raj retires from cricket as the most successful Indian cricket captain ever, took her side to the 2005 and 2017 ICC Women’s World Cup. However, she led her side 4 time’s in ACC Women’s Asia Cup. Moreover, she said she did not want to cut ties with the game following her retirement and planned to remain involved to help women’s cricket develop further.

“I set out as a little girl on the journey to wear the India blues as representing your country is the highest honour. The journey was full of highs and some lows. Each event taught me something unique and the last 23 years have been the most fulfilling, challenging, & enjoyable years of my life.

Like all journeys, this one too must come to an end. Today is the day I retire from all forms of International Cricket. Each time I stepped out on the field, I gave my very best with the intent to help India win. I will always cherish the opportunity given to me to represent the tricolor.

I feel now is the perfect time to call curtains on my playing career as the team is in the capable hands of some very talented young players and the future of Indian cricket is bright. ” she wrote in a message posted on Twitter.

Reaction of Sachin Tendulkar (The Legend):

Sachin Tendulkar, the legend of World Cricket and inspirations of many congrats Mithali on her stellar career over the last 23 years and her immense contribution to Indian Women’s Cricket in twitter. Thereafter, he also wished her all the best for all her future endeavours.

On 17 August 2002, at the age of 19, in her third Test, she broke Karen Rolton’s record of world’s highest individual Test score of 209*. She scored a new high of 214, which is till now the 2nd individual highest ever score in test Cricket. She is also the youngest player to score a double hundred in test cricket.

Mithali puts herself at No. 1 on the all-time women’s ODI batting charts. Her current ranking in Women’s ODI Player batting Rankings is No. 7, highest among all Indian women cricketers. She also scored most fifties(71) in Women International ODI. Furthermore, she is leading in the most number of women’s ODIs as captain.

The 39-year-old Mithali, in her 22years 274days long illustrious international career, inspire boys and girls to fall in love with cricket. She is a recipient of the Arjuna Award for the year 2003 and Khel Ratna Award in 2021. In addition to this, She also became the fifth cricketer in the country and the first woman cricketer to receive the Padma Shri award in the year 2015.

Mithali’s decorated career was filled with several highs as well as a fair share of lows. The biggest controversies in her career came in 2018. First, Mithali Raj’s manager accused Harmanpreet Kaur of being a ‘lying, manipulative and undeserving captain’. Then, Mithali had written a scathing letter to the BCCI accusing head coach Ramesh Powar and CoA member Diana Edulji of bias of humiliating her.

She wrote in her letter to BCCI, “For the first time in a 20 year long career, I felt deflated, depressed and let down. I am forced to think if my services to my country are of any value to a few people in power who are out to destroy me and break my confidence.”

On the contrary, Ramesh Powar was re-appointed as the head coach of the Indian women’s cricket team in 2021. However, Mithali said that the past is gone and she is ready to steer the ship with Powar after her return.

In so many aspects, she was like a like to Sachin Tendulkar. She made history in 2014, when she led India to their first Test series victory against England. And she guided the team home with an unbeaten 50 in the second innings. But none of these above mentioned records close to her heart like the one 91* in the 2005 ODI World Cup semi-final.