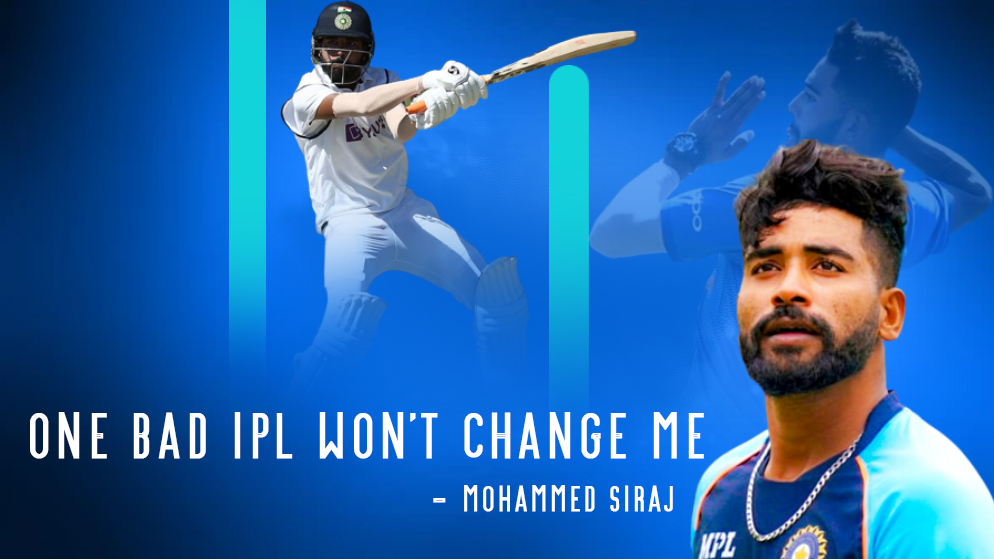 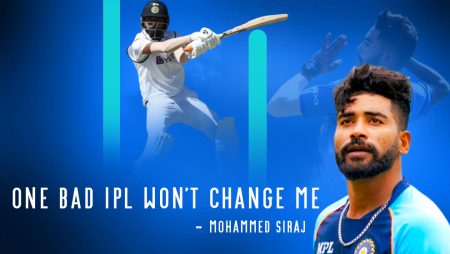 This season of Indian Premier League 2022 wasn’t favorable for many good players including Mohammed Siraj. The splendid player fortunately managed to score 31 wins as sixes, which is the highest any player did in the history. Further, the bowler could only make it to 9 wickets in 15 games at an economic rate of as high as 10.07.

During a recent interview regarding a docu-series of the film producer Neeraj Pandey; Bandon mein tha dum, which is about India’s historic test series in Australia, the excellent bowler spelled out, “One bad IPL won’t change me”. The bowler here meant that one IPL doesn’t have the power to change the perception or thinking about him. The bowler is planning a stronger comeback.

Now that you have had time to analyse, what went wrong with your bowling during the IPL?

Records are meant to be broken. Speaking about my performances in IPL, there were days when I hit a record of bowling two maidens and scoring three wickets. That record is still alive and we all are aware of it. I don’t look at things this way. I’m aware of the fact that I couldn’t perform really well in this year’s IPL 2022. However, in the last two seasons, I performed so well with the white ball.

Yes, Viral bhai showed faith in me. He told me, “You’ve the ability, work on that. Don’t think too much about one bad performance. We all have ups and downs in our lives. All we need to do is just live in the present. Stay focused now and concentrate on your performance. Stay confident about what type of bowl to throw in which condition.

As his RCB and India teammate, you must be feeling bad so see Kohli struggle through this IPL for runs…

As I said in my previous statement, ups and downs are a part of one’s life. And he’s ‘King Kohli’. He can come back anytime. He has the ability to score runs even in critical situations.

This IPL threw a host of pace bowlers like Avesh Khan, Mohsin Khan and Umran Malik. You did well for Hyderabad and India A, but the IPL helped you gain more eyeballs. What would be your advice to them?

IPL is indeed the best platform for youngsters to show their potential. And it feels so good to see youngsters performing so well in IPL and bowling at 140 kmph and swinging the ball. I’m happy to see this because I’ve been there and have followed the same pathway. I’d just give them one piece of advice : to always chase their dreams.

And, rather than thinking too much about their performances, they must enjoy the game. Just focus on the next match, fitness and line and length.

Have you started to prepare for the England tour with the red ball?

I recently went home. I came back because RCB had a match on 27th of May. Now, I’ll go back and prepare for the match. We are left with so much time for the tour now. I’ll utilize the time to improve my fitness and bowling.

You did very well on the England tour last year, picking up 14 wickets in four Tests@22.00 (8-126 at Lord’s), to play a significant role in India taking a 2-1 lead. Are you confident you can continue in the same rhythm in the fifth Test too?

Yes, I have faith in my abilities. I performed great last year in England. I’m now equipped with the experience of getting the ball to swing in English conditions.

Melbourne (where he made his Test debut and took five for 77 overall), Brisbane, Lord’s or Centurion? Which is your favourite Test win and why?

Gabba. We played cricket very well. And, it was an honour for me to score my maiden five-wicket haul (5-73 in the second innings).It’ll be a part of my life forever me since my father died a couple of days ago and I’m fortunate enough to know that I was able to fulfil his dream.

The Lord’s victory (he scored 4-94 and 4-32) was also noteworthy because we only got 60 overs to finish them out. Gabba’s victory, on the other hand, is my favourite, not because I won a fiver, but because everyone did well.